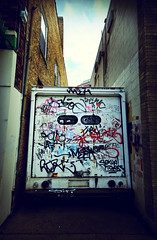 That cool van
Originally uploaded by ABMann
Lifehack: How to boost your creativity. Kinda neat.

The site say at the onset of the list of ways to up your creativity that people believe that ideas are a zero-sum adventure.

Quote: "If you feel that each idea created limits your ability to create new ideas, you’re output will be only a trickle. The best writers, programmers, designers and idea-generators I know believe that the supply of ideas is endless...."


Seriously? People think that ideas are limited? That seems just ungodly silly to assume to me for reasons I don't quite understand. Creativity isn't some solid entity from which you chip your ideas. Even the word creativity is rooted in create. That ideas are endless is a "duh" notion to me. Maybe I'm weird, though.

One point in particular I disagree with and I think many of you would have opinions on it.

.
If you are starting out in a new pursuit, you have only one goal: boost creative output. This often means publishing junk until you train yourself to do a better job. Feedback from the world (not self-judgment) is the fastest way to hone your creative flow.

There's certainly truth to getting the shlock out but what do they really mean by "publish?" I don't want people to see the crap I produce but I recognize that, if I don't put it out there, I'm less likely to publish anything at all.

However, I'd expect that if I were to publish crap I'd be taken less seriously when I produce something good. Maybe that's a zero-sum game, that you have a finite quantity of renown that is hindered when you produce crap that you show around. Or that your fame/notoriety plateaus sooner and longer if you have a pile of bad work showing along with your good. That makes some sense. I have some Flickr buddies that only show the best of their work and seem to be much beloved by the community; others, myself included, are mostly ignored even when showing something really good. I wonder if it's people seeing X good work as a fluke through a body of work.