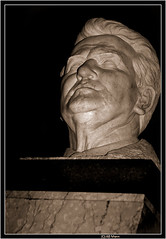 Fighting Bob
Originally uploaded by ABMann.
This is a statue of Fighting Bob La Follette.

"ON March 25, 1921, at the age of sixty-five, Robert M. La Follette Sr. took the greatest risk of his long political career. Four years after he chose to lead the Congressional opposition to World War I, La Follette was still condemned in Washington and in his native state of Wisconsin as a traitor or--at best--an old man whose political instincts had finally failed him. But La Follette was not ready to surrender the U.S. Senate seat he had held since leaving Wisconsin's governorship in 1906. He wanted to return to Washington to do battle once more against what he perceived to be the twin evils of the still young century: corporate monopoly at home and imperialism abroad.

The reelection campaign that loomed just a year off would be difficult, he was told, perhaps even impossible. Old alliances had been strained by La Follette's lonely refusal to join in the war cries of 1917 and 1918. To rebuild them, the Senator's aides warned, he would have to abandon his continued calls for investigations of war profiteers and his passionate defense of socialist Eugene Victor Debs and others who had been jailed in the postwar Red Scare.

The place to backpedal, La Follette was told, would be in a speech before the crowded Wisconsin Assembly chamber in Madison. Moments before the white-haired Senator climbed to the podium on that cold March day, he was warned one last time by his aides to deliver a moderate address, to apply balm to the still-open wounds of the previous years, and, above all, to avoid mention of the war and his opposition to it.

La Follette began his speech with the formalities of the day, acknowledging old supporters and recognizing that this was a pivotal moment for him politically. Then, suddenly, La Follette pounded the lectern. "I am going to be a candidate for reelection to the United States Senate," he declared, as the room shook with the thunder of a mighty orator reaching full force. Stretching a clenched fist into the air, La Follette bellowed: 'I do not want the vote of a single citizen under any misapprehension of where I stand: I would not change my record on the war for that of any man, living or dead.'"

The photo is actualy a tritone with black and sepia, as you can tell, but I added a third gray tone. THe third gray ink acts as a contrast enhancer making the difference between black, white and sepia more apparent. I think it adds strength and character to Bob's face, which he so seriously earned.
Subscribe