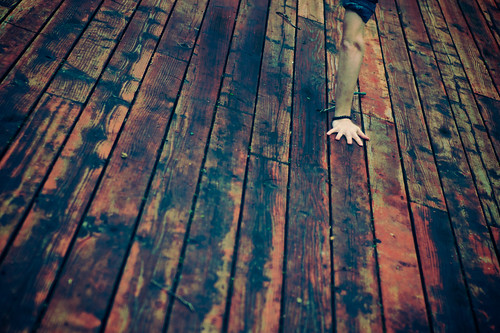 Photo: So, apparently I have enough upper body strength to support most of my weight on one hand. Cool. Now, I just need the balance so when I try stupid Capoeira-like stuff with no training, I don't fall on my head.

I briefly examined everything I've eaten in the last three days.

I think I barely met 5000 calories since Thursday night, discounting activity. So.... maybe that's why I've been having motivation problems and a series of shitty runs. Not enough calories equals little energy overall but add to that my diet which eschews pretty much all simple carbohydrate means that I don't even have any quick-burn fuel for any runs. This would explain why: 1) I can still weight train with little issue and 2) I can't run a mile before my lungs and legs seemingly collapse right now.

It's not that I am trying to eat so little. I just forget to eat a lot... which is such a difference from even a year ago when nigh all I thought about was food. Neither are healthy but at least the former is more normal and a sign that my metabolism is acting more like the rest of the population insofar as I can actually go more than a hour with crashing after a meal and turning into a grumpy butt head.

Now I just need to have more convenient food sources that will provide good running fuel and no simple sugars. Maybe a stockpile of Larabars would be good. Though dates are kind of bad for my diet. But maybe there's enough protein and fiber to reduce the glycemic load?

Still. I'm determined to have a better run today. Even if it kills me.
Lastly: WHY IS EATING SO ANNOYING? Stupid hypoglycemia.

Open to: All, detailed results viewable to: All. Participants: 23

I will occasionally say "Get some Starbucks" rather than "Get coffee." Id est, regarding certain goods, I use the brand name rather than the item name.

Did you first think I was referring to Battlestar: Galactica in that first question? (looks at