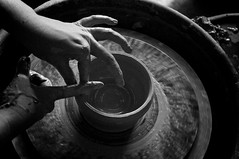 Integrals of Pottery
Originally uploaded by ABMann
Twitter|LiveJournal
Some of the necessary hand positions used to throw pots are really neat. There's much precision and delicacy. I wonder if deaf people are more likely to be better at pottery than hearing people because they gesture more frequently with their hands.

Feeling odd today. Few days away from the deadline and I'm getting mixed signals from R&D management about process for late logs and stuff we aren't going to finish testing. I thought I had it sorted, told my team about it and may have to amend my statement because of it. I do not like doing that one bit.

I've also been having nightmares. One last night about being attacked by something... non specific. Another about my teeth shattering from clenching my jaw too tightly. I went to the dentist in that one and bossed him around for not seeing my after hours and not paying attention t me when I was dumping tooth fragments on his desk. I don't think the latter was a nightmare so much as revisualization of other issues paired with some fears. No fun either way.

To whom it may concern: I am NO FUN to sleep with near deadlines. Lots of bad dreams and flailing. :/

hellocthulhu I stole this link to Astrolab's in-depth astrology reading. It's kind of neat and, I think, accurate.
( Collapse )
( Collapse )
And I would never want to organize a family reunion. Where did that come from? :)

I'm on a monochrome kick. It's almost obscene.
I'll adulate your sepia tones, dust them gingerly over your bare hips with a soft brush, if you just give me the chance. You'll love every slow minute.

( Collapse )
Automatically shipped by LoudTwitter because clearly I hate you all.