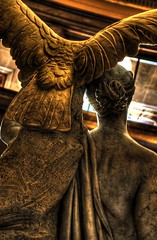 Lady and the Eagle
Originally uploaded by ABMann
ABMann.net
I'm already sick of the Brett Fahvrah news. Dude, stop being a jackass. And Packers? Just shut up and give a little to the guy that gave you so much. Plus, it will save you 39 million dollars over the next 3 years you have to pay even if he stays retired.

Of course, I only say this because I'm a Bears fan and Mr. Packers would probably go to the Vikings were he released and reinstated; that would be HILARIOUS.

Yesterday was incredible. I spent 8 hours working on certification projects and didn't notice. I just churned through it. I finished one and completed about 50% of another... I would have finished both but I found a crash in the second. In an application I'm only barely trained. Oy. So, I'll finish the second today. I've already gotten scores for the other - 100%. Because I'm awesome.

I'm very much looking forward to seeing some art tonight with

shortcakeness-fame." (yay art! You should come.) I'm going to try very hard not to laugh at the Feminism/Feminist art or ant the vague distinction between the two and/or any potential mis-labeling that seems rampant in the philosophy. I'm even intending to read up on Feminism and Feminist Theory before I go tonight. Because I like to be informed.

Photo!
Holy Detail, Batman! My stone crevices, let me show you them.

Oh yeah, new batman movie started last night. :D I hear Point is selling massive ticket deals. 10 tickets and 5 bags of popcorn for $55. The tickets are for the Ultrascreen and never expire. Huge deal; you can get it at the ticket counter.

Things I do while waiting for programs to install...

More cowbell - for your iPhone
You better believe I friggin' downloaded it.