Jack-o-vision
Originally uploaded by ABMann
ABMann.net
This weekend has just kicked large amounts of butt. Friday was a flurry of baking and tasty foods - we boiled 10 pounds of potatoes - with a trip to The Nitty Gritty to chill with friends.

Saturday we skipped the market as our fridge s over-full of food. Much relaxing in the morning and finishing of potato salad before heading off to Vilas Zoo for

jackshoegazer's Getting Old Day Scavenger Hunt and Grill Day. Fox and I failed miserably to complete the scavenger hunt a the zoo. But that's ok. We have extra pictures of monkeys to show for it.

kiwikat and Brian of no LJ,

were_duck, two other people who's names I forget, the infamous

brdgt who like everyone I know now posts about constantly,

jackshoegazer was there too or something. I forget because of bean bags and brats. Whatev.

Following that was Hellboy 2 with various people and then, um, stuff in the evening involving questionably moral goings-on. It was nice. I was lazy most of the night because of it.

Today? Today is nothing. I should probably get my fat butt to the gym but that requires pants, without which I currently sit. I've also got 200 photos to edit from yesterday along with more from the trip to the Capitol last week.

OH! Yes. About the Capitol. They contacted me about sending them photos for new postcards in August. They print once a year and new about my work from the Isthmus and various other inquiries from past photos shoots (I never cease bothering them about various building details). So, I may make a huge sale to the state or, alternately, give them printing rights to some shots in order to stamp my name and contact info all over them. Either way, seem really good for me. :)

Photo:
I caught hat I think is JSG's self image. :D Vaguely super-hero. The camera I snatched to capture in HDR and thought the Diptych is neat. I'm not sure what I think about juxtaposing an HDR with regular photo. In this case, I think it works because of the pose but it would look better had I gotten the proper shots for HDR of 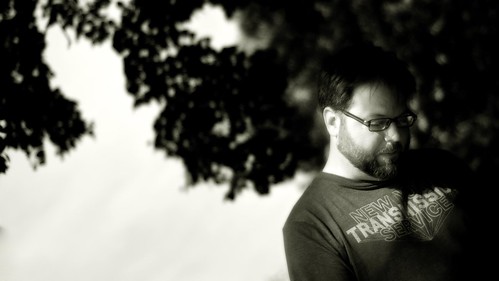