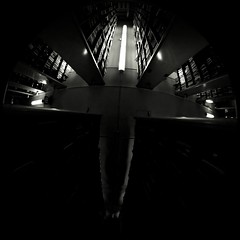 On the cross of Knowledge and Darkness
Originally uploaded by ABMann
ABMann.net
I could do without this headache, thanks. I'm not sure if I'm dehydrated or withdrawing from caffeine addiction - the latter seems to late after not having coffee since Tuesday. Either way, Friday's with headaches suck and it's going to rain most of the weekend. Unfair with the number of things doing those days.

bah. To night at least I have no direct plans, a number of "if X person comes to town" potential, but nothing set. So! I'll be on Stat tonight with camera for the first time since last year - I think I have one shot of state at night? (wow, and it's nearly two years old). or not. Apparently I haven't been to state at night for two years. Well, this should be nifty.

Barring photo-wandering, I'll hunker down at Michaelangelo's for coffee and so I can.. sigh.. do some work remotely. Stupid large projects. I supposed getting a look sooner is better than later what with a truncated work week next week. This would be so much easier to ignore if I hated my job or had no sense of ownership over my product.

the point of all this is that I'm going to be foot-loose and fancy-free this evening, mostly, while

lady_fox parties with the to-be bride tonight and you should come out. Evening phlogging is the way to go.

Getting this shot was annoying. All the lights in the stacks are motion sensitive. I had to lie down in the adjacent aisle and slowly scoot my camera into the one next to it. The sensors only respond to "fast" movement so I was able to get it in the dark aisle without triggering the light. Thus, the light and dark pieces to the cross.

I think i added a blue channel monochrome layer in Aperture. I think I added a few percentage points of green to it and tinted the mid-tones green to lighten it without affecting the shadows and highlights. I'm not 100% sure, actually. I remember the edits for this one because I was thinking I'd post that. But decided to turn it into a Before/After set.

Apparently it's easier to remember the "difficult" post-processing photo steps. THIS one was too EASY for me!

I'm trying to figure out why I like it....
---
Also - what will the next Photography Experience be‽ Click the link or head over to

photog_xp because I feel next week will really rock. Even more than this week, yo, and this week was PRETTY AWESOME. 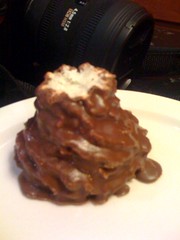