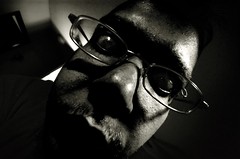 The photo in which we highlight every facial flaw I have.
Originally uploaded by ABMann
ABMann.net
Oy. Yet more houses today. We found a similar model that we really liked today - the Stuart - except for the back-loaded garage. Carriage lanes = Teh Sucks. i don't want to see a pile of concrete and garages when I come home or sit on the deck/patio.

We now have a better concept of square footage we'll want to have enough space. Roughly 1800 square feet is enough to have our ideal bathroom, guest bed and office with good space for entertaining in the kitchen and greatroom.

Also, after having seen the fireplace with built-in shelving, shelving that uses the same face and finish of the rest of the wood, it's really nice. I think we'll add that if not too expensive. It's just lovely to have that match everything else.

Next, we have to figure location. Ideally, the site off Cross Country as it is bear both our jobs - well, where my job WILL BE in the next few years. But sites are going quickly. We sat with one of the guys haning at the model open houses today and reviewed what lots are actually open. And, uh... yeah. Most of Heather Glen is bought or under construction. We may end up in Linden Park which is hardly a bad thing - it is on the other side of M, north of Hawk's Landing. So, a little further north but still good location. I could still bike to work.

Head hurts. Too much information these last few days. But we're getting much closer to the scary How Will You Pay For This, Hmmm? portion of house buying. :)

Yesterday's photo was a huge hit. It topped 71 in the Most Interesting list for the day last I checked. Nifty.

What would you think of a QnA re: Photoshop? I have a lot of knowledge about it and would like to pass it on. I figure I open a poll every once in a while for questions and answer one in a post with examples. Would any of you like that? I think it would be cool

Photo: This is what happens when you drain the red channel out of a portrait. Super-saturated blue channel and green general light turns into a flaw highlighting nasty photo.