More entries in the Sp2E!

Well, I'm off to Houston this afternoon. I have a two hour layover in DFW to which I'm looking forward; I like layovers in airports. You get to wander around and watch people, eat bad food, and generally experience people being people. I don't get upset when traveling alone and I have delays. When I'm by myself traveling is for travel and I'll eventually get where I'm going. I think this may only apply to travel where I'm not in charge, like air, train or other not-me-driving sorts.

Diverted!
Originally uploaded by ABMann
ABMann.net
Diverted to WhichitaFslls, tx instead of landing in Dallas.

I suspect I'm not making my connection to Houston. Curiouser and
curiouser. 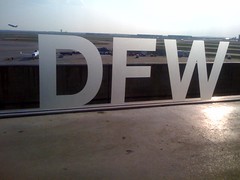 Only mostly late!
Originally uploaded by ABMann
ABMann.net
will.r
"Be master of mind rather than mastered by mind."
-Zen proverb

Too much travel make ABM something something...
Originally uploaded by ABMann
ABMann.net
They boarded us on time for the delayed flight from DFW to IAH. Then
the FAA said our flight crew is over their time.

So! Sitting on a plane. Again. Still?

First officer just said the captain is missing. They're pulling some
other guy off another flight.

Why do I travel again.

Edit!
Replacement captain one was a no-go. Now we get captain two from some other flight. Fun fun.


Edit the second!
we have deplaned. People are pissed! I'm fine? I guess.
Collapse