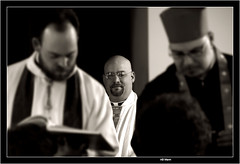 Through the valley and the shadow
Originally uploaded by ABMann.
I had one of those nights yesterday where I want to scream "I am NOT AN IDIOT!" as loudly as possible.

Firstly, my team just rewrote a very large and very important piece of functionality regarding merging patient records. My senior QAer and I spent most of yesterday testing it. At quarter to 6 he found a tricky little problem that we needed to address lest we leave a huge hole for many problems on other teams.

The immediate solutions we came up with were not good, involving massive rewrites of the code. We grabbed the developer and talked about other options that didn't require so much pain. Now, I'm not familiar with the code as they are. The developer wrote it and my QAer has been testing nothing but it since he started here. I've had about a year of it and not consistently. So my ideas were outlandish and birthed from incomplete knowledge of the functional code and external application impact. EVERY idea I had was immediately shot down with, "Oh god, we can't do that." or "Why would we want to do that?" or "That's just a terrible idea."

After about 10 minutes of this I got frustrated and left. I'm not sure if I looked angry when I did. Hopefully not (sorta hopefully) as that would be bad form for a TL. We'll see how they treat me today.

Second, I spent two hours at barriques working on a side project related to all this. I'm trying to make a test case generator in Excel's VB editor. I need to take List B and randomly assign items from it to List A. I was banging my head against a wall trying to get a conditional into a Do Loop when I realized the conditional I needed COULDN'T be put into a Do Loop... after two hours of work.

By the time I got home I'd figured out a better way to do it, namely trying not to have fail safes and make the thing idiot proof. Since I'm the only one using it, I can assume I'll know the right way to build the lists. but fucking hell, last night sucked.

I came home and spent another few hours processing some photos from the weekend to make myself feel better. At least I know I do that well.

tandu's ordination was complete, he was sitting while the other guys there confirmed two new members. I snapped this shot between them. I emphasized the natural lens blur a little through a layer mask and lens blur filter. I then made like half a dozen solid color filter layers set to >5% opacity to get the warm gold hue that may or may not be noticeable in the PNG. PNGs suck for subtle coloring and bit depth but prints of this photo will be very nice.

And tonight I'm finally getting an external hard drive and making backups of my Aperture library. Hard drives are cheap. I think I can get 300gig for about $100.

tandu has the mad hook up and is getting me half a terabyte IDE drive with enclosure for less than $150. (and a USB splitter)
O! the archives I shall make....