Preaching to
Originally uploaded by ABMann.

tandu. A somewhat ill-flattering photo because I'm evil and do everything candid and surreptitiously. :) Posing? Posing pisses me off with it's artificial nature. The photo is nice all the same.

So. Lenses are expensive (duh). I'd hoped that the Prime lenses would be cheaper but the least expensive I'm seeing is the 50mm which runs about $100. I think I may go down to the local Camera Company with my camera and pop off some shots. get a feel for distance and such. I really like the idea of getting a really fast lens but don't want to drop 300+ on something I'm going to use in selective instances. It would need to be worth it.

I'm also toying with some of Sigma's prime lenses which are somewhat cheaper but designed exclusively for the smaller Nikon sensor size. Less fall off and more reality-reflecting pictures. However, they run slower, 2.8F rather than 1.8 which is a pretty large difference in light in that range.

Anyway. Today sucked. Poe was hurt recently in a scuffle so I had to take her to the vet. All's well but she's on oral and topical antibiotics for the next week. It was very expensive. :(

She's also lost a lot of weight since the last visit - about 2 pounds. We're going to get her thyroid checked next month to ensure that it's not systemic. We're guessing the extra activity from all the stairs and the leaner food is the cause; also that Electra is very defensive about the bedroom and two of the food bowls, Poe likely just hasn't been able to get to the food. This would explain the mad dash to the food bowls when I fill the dish on their cat tree and the scarfing of the kitty treats. And maybe the constant begging in the kitchen. I did move a bowl to the hallway again to see if she'll get to that more.

May 2nd. Moving on May 2nd and extraditing the cats form a less than stellar situation. 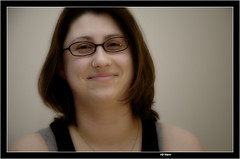 My favorite from March 31st shoot with