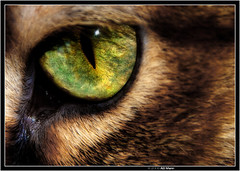 Eye
Originally uploaded by ABMann.
[Jorb]
Last week I went a bought bunches of stuff for my office: a radio, desk lamp, headphones and a yoga ball to swap in for my desk chair..

lady_fox and I rearranged my furniture to increase "flow" and generally raise my comfort level. So far it's working quite well even though my radio doesn't pick up ANY radio stations, forcing me to listen to the one CD I have here over and over. I will eventually remedy this the "old fashioned" way and tape a longer piece of wire to the current antenna and run it along my windowsill.

Problematically I'm OK spending more time at work. In fact, working at night is really quite comfortable, so much so that I've contemplated coming in a few evenings since last Wednesday and even this weekend. Nuts and likely tied to the amount of work I have, but I fear for my sanity and free time.

[Relationshippy]
Life is pretty good. Fox and I have been doing better this last week than in previous weeks. What's funny (not really) is that much of the increased comfort has come in tandem with me looking more actively for another partner. Some amount of pressure has lifted which is nice and I know she's happier with my looking. All this, of course, uncovers the "meeting people" problem followed very closely by the "I don't share my men" problem many, many women seem to have. :)

[Monies]
Oh money, I hate you so. I saved more than I planned last month, which is good. I'm battling the saving lots of money/living like a pauper problem. My goal of buying a house in threeish years (did I tell anyone that?) is very doable with good saving and shrewd investing but I don't want to live a boring, boring lifestyle. Problematically, I may need a new car in that time period (and I've already picked it out if necessary) which throws some problems in there.

We're doing a blitzkrieg on Fox's debt for the next year. She should be paying off all her credit card debt by next October (potentially much sooner depending on some external sources) at the latest which should mean spreading the housing costs between the two of us, which means a little more spending and saving money for me and a whole lot of extra money for her. Then we kill her car loan by the following January, I think.

The result should be her significantly relaxed money situation such that pretty much any job could sustain her and significantly less money stress for the two of us. She'll be able to make significant savings too, which will be very good.

I open my investment portfolio and assess my 401k in 4 weeks. I'm excited.

Let's offend as many people as possible. That's so gaytarded.
And so is this. That butthead is back.
Collapse