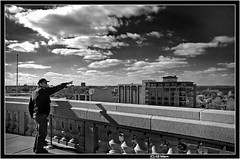 Da Druben
Originally uploaded by ABMann.
Lack of sleep and many work hours caught up with me yesterday. I had a migraine hit at around 11 o'clock, rather quickly too; it surprised me. usually they start slowly with a small pin-head sized flashing/sparking dot in my vision. I generally notice it at first when I can't see my fingernail on the key board or a specific key. But I noted it yesterday whn I was having trouble seeing my Outlook alerts which flash on my left hand monitor, upper left corner.

By that point, I can't do much to lessen the impact and quickly became achey and nauseated. Most of the sparkling blindness had passed by 11:45 and I went for lunch hoping it would kill the nausea - poor diet, little water and bad posture cause my migraines - and it did; in fact, I had one of the most satisfying pickles evar.

Hower, that left me drained for much of the day. It was a cardio day and I got about 30minutes on the elliptical machine before my brain gave out even though my body was OK to push on ( I think). Took twenty minutes on the treadmill with a medicine ball to finish it up but it wasn't quite as much as I'd normally do.

Not sure waht I awnt tonight. Blue cheeseburgers and A Prairie Home Companion was originally the plan but Fox wants to go to a party.

Last night was my first night relaxing at home for what? Two weeks?
Bleh.

Photo: Taken on the Capitol rotunda after we'd finished the tour last Saturday. I think this is the north-eastern view, the Monona Terrace was to my right.

The man there is pointing something out to his wife who is behind him. She was tiny and my angle was funky so you can't see her.

This photo, I think, is a good demonstration of the triangle concept in photography. The foreground adn the city are generally triangular in shape which offers good flow and softens the thrust of each section. More blend of elements rather than each standing on it's own, I think. Makes logical sense to me.

I just heard the most infuriating caller on NPR just now.
She said she was voting "yes" on the marriage ban because, if gay marriage was allowed it would impact the legal rights opposite-sex couples have.

How is extending the same rights to another group of people changing/reducing/disallowing the rights of those that already have them?
Wait, I know! It means the rights will be less special. Hetero couples everywhere will stop filing joint tax returns and claiming spouses because The Gays can do it too.
--
In Funny news:
Stingrays gettin' uppity after successful assassination of Irwin
--
British Tribunal upholds suspension
This woman was suspended from her job for refusing to remove her veil while she worked.
Ludicrous.