If you prick us… 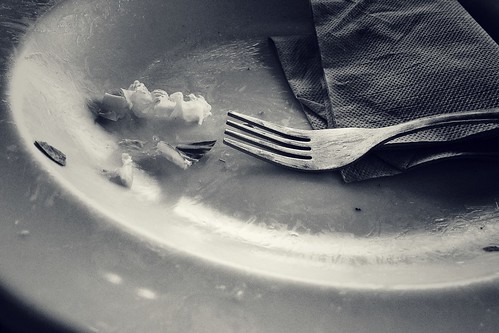 If you prick us…, originally uploaded by ABMann.

I’ve been toying with the idea for a while, at least a month, since I read about Jimmy Whatshisname on Livin’ La Vida Low Carb doing a super-high fat diet to induce ketosis and supplement/reinvigorate his weight loss. His story parallels mine pretty well. He lost a ton of weight, relaxed his diet monitoring and the weight slowly crept back on.

Granted, I’m still not nearly as unhealthy now as I was when I started. I was, at my worst, 250+ and could barely walk up stairs without getting winded. I’m currently sitting at 210ish and can run a 5k straight at about a 12 minute pace. It’s not where I w when I ran the Madison Mini two years ago but it feels like light years away from high school and college. I’m significantly more energetic and muscular. I don’t think I’ve ever broken 50lbs on the bicep curl before, even when I was thrashing heavy bags at Ronin in 2003.

But. Over the few months I’ve been wildly inconsistent in my eating and exercise habits. I let certain things slide which lets other things slide which creates a compounding rush to the bottom. I’ve even had a few "this must be what it is like to slip into a diabetic coma" moments in the last month which lead me to my original "oh fuck" moment a few years ago.

Which is to say I wanted to take a concrete step in the right direction. When in ketosis, your body is actively digesting body fat to supplement the nutrition your body is getting to maintain or build muscle rather than deplete muscle even though muscle s more readily broken down. To achieve ketosis, one must eat a sufficiently high fat content and sufficiently low protein quantity to spur ones isn’t into action.

Thing I’ve been recently seeing in various low carb athlete blogs and books is that last part, that eating "too much" protein can inhibit weight loss because your diet is supplying sufficient amino acid content to build or maintain muscle mass without needing to digest fat. Increasing fat intake while maintaining relatively low protein content – say 20% of your diet – means your body must find more amino acid content. But, because your getting sufficient calories so as to avoid starvation, your body simply digests existing fat to get the rest of what it needs.

Or that’s the theory at least.

The easiest way to monitor body ketosis is daily blood testing just like glucose monitoring, though slightly less real time. Blood glucose levels can fluctuate wildly and rapidly in a day because of diet whereas ketones change more slowly as or body produces more as it digests body fat. Likely the most accurate reflection of over ketosis from the day is testing ketone level at the end of the day which can help you gauge your dietary intake.

So my target levels are 0.5 to 5.0 each day, hopefully closer towards the higher end. People who maintain this level of ketosis, along with weight loss, generally see increased clarity of thought, reduced food cravings, increased energy levels and all those other benefits of being healthy and awesome.

I suspect having a consistent feedback source telling me if my day was "successful" will be useful. Since weightless is gradual when healthy, I don’t get consistent enough feedback to keep me motivated. Too, increased muscle mass or endurance is similarly slow and has become an unreliable motivator for me too.

If I start to feel funny as my ketones change, I can relatively quickly adjust it by eating a bit more protein or greens. Or a doughnut.

Not a doughnut. Doughnuts are evil.

The monitor should be here by Friday.