A dragon, a dragon 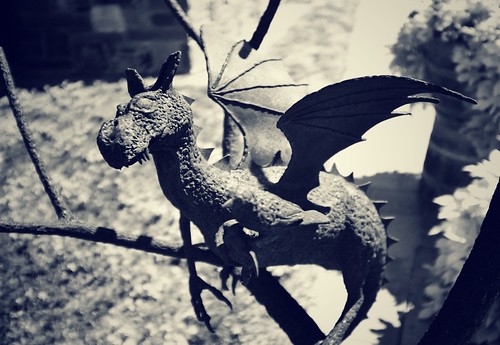 A dragon, a dragon, originally uploaded by ABMann.

In writing last night, I made some interesting connections. I’ve had, for as long as I can remember, this hang up over creating value in the things that I do.

Value isn’t right. Money. I’ve always been obsessed with creating money out of the things that I do in so far as I’m asking myself continually how I cAn monetize something. This includes journaling, blogging, photography, rope dying and the like. I feel like anything I produce has to bring some sort of physical wealth otherwise it isn’t worth it.

I can tell where it started. Years ago, right before I started applying to colleges I was speculating out loud to my father what I wanted to do. I mentioned teaching English. I had, up to that point, always wanted to be a writer and figured an English degree would help that. My Dad said, " I think you should challenge yourself more." (or something close to that) I asked a few questions and eventually figured out that he meant "you should make more money."

Huh. Ok. I suspect his intentions were more to ensure that I could take care of myself. My Dad has always been big on self-reliance to the point that he actively debated calling me when he fell down the stairs and hauled himself back up them and drove himself to the hospital with a displaced knee. He called. A few days later when he had the surgery scheduled to fix his knee.

But that stuck with me. My brain translated it into "you must monetize everything you do" rather than just doing the things I love. It’s certainly useful to a point, to ask how you could sell the things you do. Very entrepreneurial. But I seem to take it far enough that it squelches my desire to Do things.

It is always in the background. I’m not sure how to stop it, especially with photography. If I’m not selling prints, what’s the point? Or, if I’m taking a photo why aren’t you using the big camera? Otherwise you can’t print it.

It’s so ludicrous in print. When speculating a little last night via text with Alyska, she suggested I use photos to riff on in journal entries to keep me writing. I think it has a more direct benefit of working through the monetization hangup.

I fear it means I’ll be that dude taking pictures with his iPad. I already did it last night.

I’ve been writing two or three entries a day this last week. Something is working.