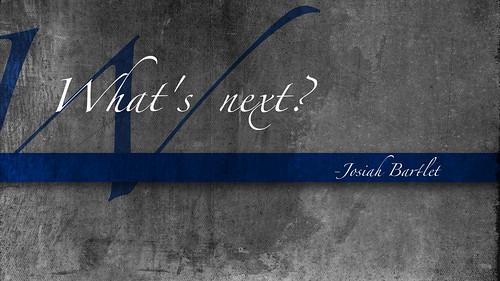 The West Wing is, hands-down, my favorite TV show. For those unfamiliar (shame on you) it's what made Aaron Sorkin famous and was fairly well received. This quote comes from the president, Jed Bartlet, played by Martin Sheen.

Bartlet is kind of smash up if the best of JFK, Clinton and Reagan- JFK's presence, Clinton's politics and Reagan's folk-sense. It makes for a compelling character and riveting speeches.

This is my favorite quote. When Bartlet was ready to switch topics, this is what he said. While on the surface, it sounded arrogant, it was more substantive. Bartlet was always multiple steps ahead of the game and, when he'd already figured out the End Game, would use this phrase to move the conversation along.

I've been. Using it at work to finish out meetings and get my team thinking about the future. I've been meaning to make it into some art to put up in my office.

Which I shall do later this month.