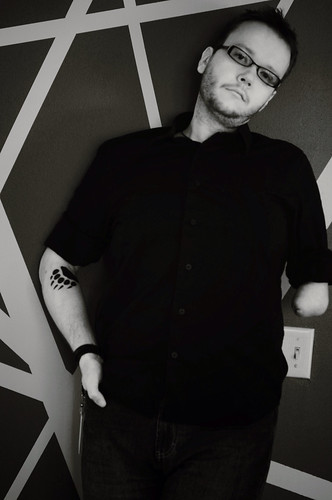 I grew up essentially without religion. I used to go to church with my friends on occasion in an attempt to understand the point of religion. I attended Roman Catholic, Methodist and Lutheran services and each time was left with a resounding…. Blah? Nothing felt either useful or right.

When my parents divorced in 1993 my mother began exploring her own spirituality and included me in her exploration. I think she knew that I was curious and that, as stated, none of the organized religions really did it form me. She started taking me to drumming circles, meditating circles, journeying circles, reiki healing circles… and other such [action verb] circles in what I think was an attempt to instigate a modicum of spiritual development in me. After all, if you believe that some sort of God exists, you’re never alone. (Especially in the bathroom.)

I remember a moment when my mother asked me if I wanted to find my spirit animal. Ad had been attending discussions and journeying circles in an attempt t find hers, an attempt to reclaim her spirituality. She was eager to take me, a lonely little kid, and create a sense of supra-personal companionship- sense of Belonging in the universe.

“I’ll guide you through a meditation.”

“What will it be about?”

“I’ll take you to a deep place in yourself where your spirit guide will be waiting. They will greet you… or attack you.”

“well… Probably not but it is usually a sign of protection or that there is sickness inside you they want to rid you of.”

She started some melodic drum music in the background as I lay down on the couch. She started guiding me through the visualization exercises.

When I closed my eyes, I was standing in a field near my house. The sky clouded over and cracked open in rain. The earth beneath me loosened and I sank in, dissolved into it.

I re-emerged in a glowing rust-colored tunnel. I could see the roots of trees and flowers above. I started walking east towards a faint point of light. As I walked, I heard a growl. In a gap in the wall stared blue wolf eyes. It stepped out and eyed me and shook its head. I was not here for him and continued on. As I stepped by him, it pounced and attacked my eyes. Gnashing teeth and hot breath and it ran off.

I stood up, confused and continued on. I suppose there was something amiss with my eyes or my unconscious was a little obsessed with my mom’s previous statement. As I neared the end of the tunnel, the earth gave way to nothingness. They just ended and I stepped out into endless dark broken only by a crystalline Mesa. At the top I could see a fire and some large shape sitting near it. I climbed and climbed and climbed and climbed.

At the top, under a starry sky, I saw a brown bear with a small raccoon mask on. He offered me a stick with a marshmallow stuck to it and pulled up a log chair for me. We had much to discuss.

Much of the reason I got this tattoo is to remember the result of that guided meditation. Bears symbolize introspection and dreaming, two things that have been increasingly important to me of late. Each of these are ways of self discovery and personal empowerment and as I head into my 3rd decade of life, I want to remember this part of my life and the meaning i took from it. Putting it in my skin as a reminder of this part of me, of my mother and that summer before she moved to Arizona, is the best way to do that.

Now, I just worry that one tattoo becomes seven.

Because I have… Ideas.