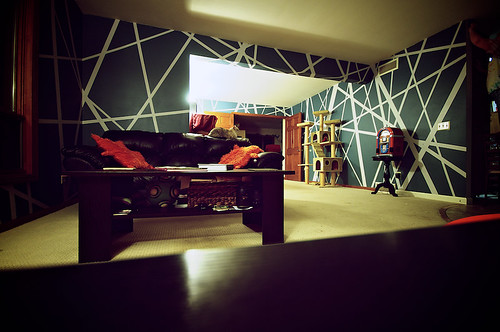 If you know us, Fox and I aren’t precisely conservative with design. We’re not afraid of color or garish style. We’ve, over the last 8ish years living together, had Moroccan dens, eggplant bedrooms, apocalyptic murals, neon kitchens. It’s safe to say, we know what we like.

When we bought Doomsday Manor we knew we weren’t moving any time soon so we could take a discerning, if not plodding, look at each room and get the design exactly where we want it before moving forward. Really, I think we don’t move forward fully on a room until we hit that “Aha!” moment wherein the whole thing falls into place.

That’s how it happened with the living room – we had colors and furniture and arrangement picked for much of it but never really did anything until we saw this photo on 8/6: Orange Stripes via Jennifer Glass. We finished the room the next month over Labor Day (about three weeks later).

I think we hit that last Saturday while hanging at the Hookah for both our den and the library. Firstly, we figure since we:

We’ll turn the den into a hookah lounge for ourselves. Originally, the room was going to be blue but we don’t think that’s quite right. So we’re swapping to a burnt orange.

Now, we really wanted a blue room some where. And hey, why not a blue library rather than a red one? Would that work in the same tone we wanted… well, not really. No, not blue like above – blue like this in semi gloss/matte 12 inch stripes. yeah, that feels right. And a white wainscot panel?
no, white is too cottage. How about black. We could do a neo gothic thing with all the silver accents too. Yes! Yes, that’s it exactly!

And libraries need club chairs. Do.. do they exist in silver or white?
Wait. They do? Oh crap, that’s perfect.
Perfect.

So. We’re gonna start on this the next weekend we actually have free. It’s a bizarre blend of Victorian/Hollywood glam that I think will be right up our alley…..