I am Lost and the Light Won’t Lead Me 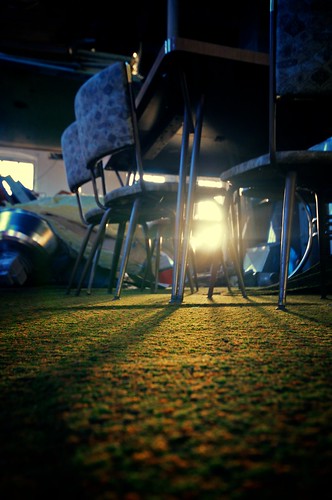 I am Lost and the Light Won’t Lead Me, originally uploaded by ABMann.


This is from that antiques trip and I completed last month. In our wanderings and, closer to closing time, we stumbled upon their third floor furniture room.

It was cold and dreary with a few cracked windows and, largely, in disrepair as they expanded the useful floor space. As a fan of destroyed and decimated buildings, it was fun to photograph. In retrospect, looking through the photos a month from the day, I don’t think I captured that loneliness or the brokenness well in most of the shots.

Of the 30 or so shots, this was my favorite because of the light and the pile of broken chairs and tables in the background. It’s like a house collapsed around a retro forties kitchen and no one bothered to fix it.

(I also love the carpet. You may or may not know, but I’m a fan of hideous decor.)

I think not really grokking what I wanted to capture lead to too much documentary style capturing and insufficient consideration for motif in the shoot. Still, it was pretty neat.

Also, I am so unlikely in the top 15 for that M9 contest given the type of photos showing up already. I knew I should have submitted photos of people.

Last: Fujifilm released sample shots for the X100. Unsurprisingly, they look nice under what ever conditions they used. So, it’s not especially helpful.

I think I’ve backed off my “must get Leica” craving and am dithering between the Olympus EPL-2 and the X100 as my next camera purchase.

I’m trying not to select based on looks alone so I’ll need to wait until the X100 releases. I suspect it is the better overall choice because it uses the larger ASP-C sized sensor which will perform better in lower light than the EPL-2 (most likely).

I’m not convinced I need more than a 35mm lens.
But options are nice.