How to Get Hit By A Bus 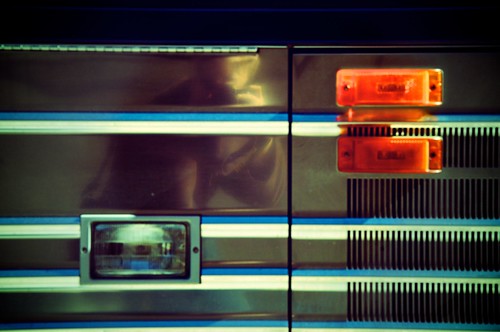 How to Get Hit By A Bus, originally uploaded by ABMann.

So. open Art Studio was this weekend. It went well. I think, ultimately, what I was presenting was both insufficient and incorrect.

alyska has, you know, a business built around her art and, thus, a large stock of Stuff to display in her workshop. My pieces were dwarfed by her Huge.. tracts of land.

Incorrect insofar as only a handful of people seemed interested in my photos. Though I wouldn't necessarily pull them from presentation, if I'm trying to sell my services, I need to appeal to a wider audience. What this really means is adding into the mix more, well.. generic art to present.

Or something really edgy that will offend everyone in Wisconsin.

I am really terrible at chatting with people as they wander through. Partially, most weren't interested in my stuff and how I do it so it was hard to engage.

So, it was an Ok experience. At least I got to see the white mini-kilt that is on its way to a gay cruise. :)

Also, I'm on Facebook now (again?). Link below in the bar. It will be, essentially, networking and photography-related as son I as I can cut the chaff on the darn thing.

Oh, and also for showing off to my friends that I'm a runner now. Because DailyMile can cross post.

Photo!
I really like Apreture 3's curves and levels controls. It makes for more interesting cross processing and lomographic manipulation.

I did not actually get hit by a bus.