fliege_wasser both did this and I'm a sucker for the What's In Your Bag Flickr group. So, stuff!

The load has gotten even lighter since I swapped the iPad for the netbook which was a win all around. I've been carrying the iPad naked because it fits better. I actually like it without the case better, the experience feels more immersive.

Other stuff in it:
Bottle caps, in case of apocalypse. (What started as an accident became a bottle cap or two in every bag I have)
Pens and Sharpies.
MAOAS.com buttons -I'm in a show with them this weekend.
USSR cigarette case with my cards.

SHOW NOTE! Friday night 10/1 at 7 in the Overture center is the christening party for the weekend show. I, along with a number of other nifty artists, have pieces up.

alyska has lent me wall space for the weekend. So, you should come out and see my prints and oogle her jewelry.

Lastly I saw Lex and Zee today after, wow, many years. And it was nifty. Lex made me excellent coffee. : 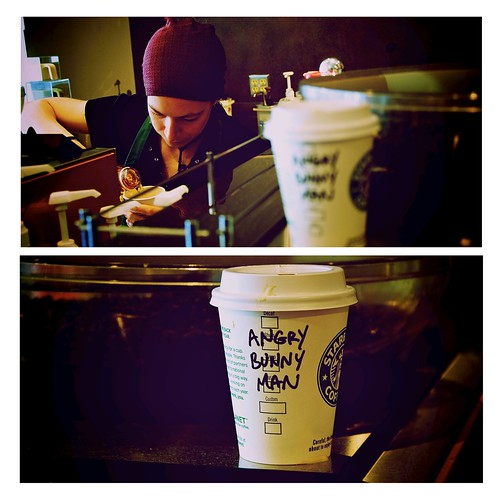 And she called me legendary - as in mythical beast. :D

Last lastly:
The following people should do a "what's in my bag" post.

tyskkvinna
And it would be hilarious if she actually saw this: