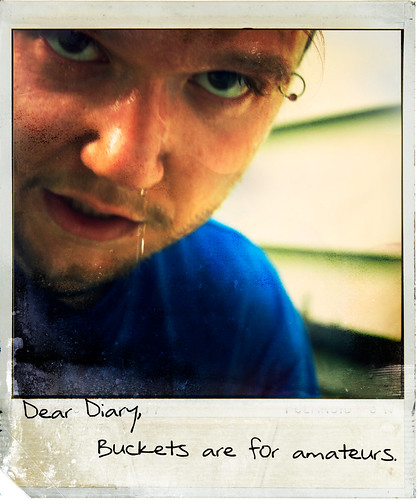 Only one person showed for the group run yesterday and it was the sprinter. He ran with me for the first two miles then scurried off. I was kind of embarrassed because I couldn't catch my breath for those first few at all. I swear I'm in better shape than that, Mr Sprinter. I blame the pollen count.

Otherwise, I'm glad that no one else was there. It was a hard run with a lot of walking and grunting and sweating. But, as stated before, I survived and finished the full 12 miles.

I'm surprisingly good today. No unexpected soreness, mostly in my calves and it goes away pretty quickly when I move around. Getting out of bed is really the hardest part. But that is likely because of cats and a warm girlfriend.

In other awesomeness, the house stays cool so well. Even in the 92 degree afternoon the house didn't get above 75 on the upper floor with the den and basement being significantly cooler. It's rather nice having 60% of the house underground.

Lastly, had a fantastic brunch with

labelle77 and her son, Mr. Poutyface, at Cooper's tavern. Great conversation, that Mr. Poutyface is. I just invited her to hang with him. :)