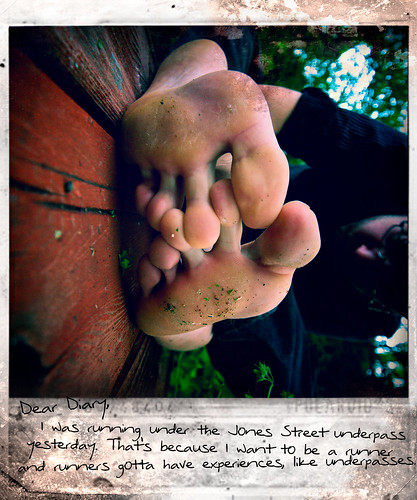 The quote is from my favorite comic series ever: The Maxx, by Sam Kieth.
Uh, well. Adapted, I mean. Swap "writer" with "runner" and you have the real quote.

Feel somewhat more rested today. I didn't make the full 4 miles and pile of hill intervals yesterday. Rather, I made it two miles, got tired but convinced myself to do at least one more interval which turned into three more intervals for a 2.58 mile run up and down the hills by my house.

My body didn't much care for all that strenuous effort but, in retrospect, I feel very good about it. I'm starting to see the appeal of this sort of punishment. Subsequently, I'm setting a mental goal of being able to sprint the up hill run from the corner of the lowest street to the water tower on that hill in less than 4 minutes.

It's half a mile at about 4% grade. I'll probably sneak in intervals on it occasionally during the next two months before my race after short runs when I've recovered. At the least, it'll built strength and (I think) anaerobic capacity.

Well... not in the performance area, I mean.

labelle77 which is nifty.

See? I do other non-running related stuff. Did I turn all of you off my blog with this sudden change in focus? It's been dead lately.