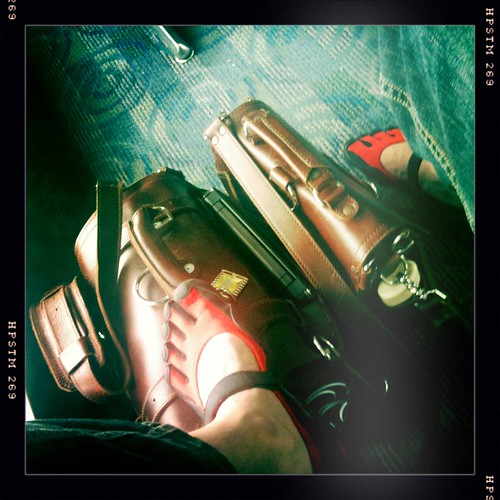 Traveling yesterday was good, as far as traveling goes. I ended up napping briefly between shift end and my checkout time, about two hours from 9 to 11. Packed and then hung out in the lobby at the CVG Marriott for two hours until I caught the shuttle to CVG.

CVG iss allure than MSN. 8 terminals instead of 12 and the only food is a Breugger's Bagels. Their coffee was scalding hot and tasted of sausage. It was... Less than optimal. But! Let ne tell you, after being up for many hours, you take what coffee you can get.

The wait was uneventful. The flight was late, of course but I had a two hour layover in ORD;so, no big deal really. I even had more than enough time to eat a terrible burger and get some Starbucks before the second flight was similarly delayed.

I am glad to be home to Foxes and Catses and nifty iPadses, on which I am currently typing this entry to discern how much I really like the keyboard.

I really like it, in fact; though, I think it could be a touch smaller in landscape AND include more keys, such as a semicolon on it. I mean, I love me some semicolon. Plus, there is nuts enough punctuation on the thing to confuse me as to where to find the rest.

Still. I'm certainly faster ting on this than my netbook but less than full keyboard. For now. I'm already getting faster with shorter cuts like apostrophe skipping/autofilling for contractions.

I've already put my portfolio on here too. It looks incredible in the native iPhoto application, silly transitions and all. Still working the kinks out of my workflow. It will currently include smart albums and tagging of photos in Aperture and then a tethered sync for now until I can get editing done on here. Then... Who knows?

Now... Just get me some photo editing programs, world, and we' ll be good.